A tribute to Silver Kiwi

Has been Campaigned a few times on the Continent at the age of 11 years and still won: 1 Res CAC in Germany, 1 CAC / CACIB in Valencia Spain, 1 CAC / CACIB & Luxemburg Ch Title in March 2000.

While he stayed at our kennels Kiwi mated his Grand Daughter and gave us 5 Beautiful puppies. It was an honour to have him with us and we did enjoy every minute being with him he gave us his friendship and loyalty.We would like to thank Joyce and Felix that they have trusted this great Champion into our hands. THANKS

Some of Silver Kiwi's progeny are:

- It Ch Eyes of the World Zantana 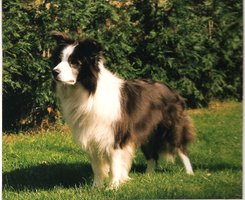